I picked up my CSA harvest on such a beautiful Vancouver day. It feels like summer has arrived!

As I have been crazy busy with finishing up my food service practicum and working, I asked Paulo to make dinner one night. I wanted him to make a tabbouleh, even though he wouldn’t eat it (raw tomatoes and carbs on his non-carb day), and use up the parsley. The WHOLE bunch of parsley.

I even wrote down the recipe on our menu board at home, but when I returned home and looked at the tabbouleh, it didn’t look as green as it should have.

He only used half of the bunch of parsley! He was surprised when I quickly chopped up the rest of the bunch and threw it in. He didn’t think I was serious about using the whole bunch, but tabbouleh is essentially a parsley salad. Here is my recipe:

1 big heirloom tomato or 2 on the vine tomatoes, chopped in 1cm cubes

Mix everything together and refrigerate to let the flavours meld together.

You can also use quinoa instead of bulgar, and add garlic and mint to amp up the flavour.

I still haven’t used the daikon radishes, but I think tonight… or tomorrow… is the time to use them. At Growing Eden, there was a massive cilantro harvest, and I wound up taking a big bunch home with me, so I think the daikon will work wonderfully with the fresh cilantro. I haven’t decided if I will cook them, which I have never done before, or eat them raw.

I also tried to make our regular salad a little more exciting, so I topped our salad with fried haloumi! Just cut it up into whatever size you want, and pan fry in the smallest amount of oil, turning once to get a nice golden brown colour on both sides.

Haloumi is a firm, salty cheese, which tastes sort of like a mix between mozzarella and feta cheese. It holds its shape really well, so it can be fried in a pan or even grilled on the BBQ without making a greasy sloppy mess.

I served my salad with a hard boiled egg, but I made 3 seared salmon fillets for Paulo, 1 and a half for dinner, and the same for his lunch.

For the salad, you can really add anything you like to it. I decided to add strawberries, avocado and haloumi to my fresh garden lettuces and pea shoots. I topped it all off with a chia vinaigrette.

salt and pepper to taste

I throw all the ingredients in a mini canning jar, and shake it up until combined. Refrigerate for at least 1 hour. The chia seeds swell up, and hold all the dressing’s flavour. I also added poppy seeds to this mix, and you can add dijon mustard too, which will help the dressing from separating.

I’m excited to get my next harvest! I think garlic scapes are in the forecast!

Here is a little peek at Growing Eden 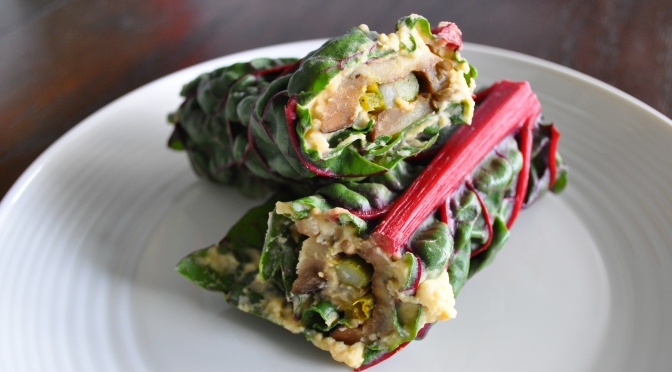